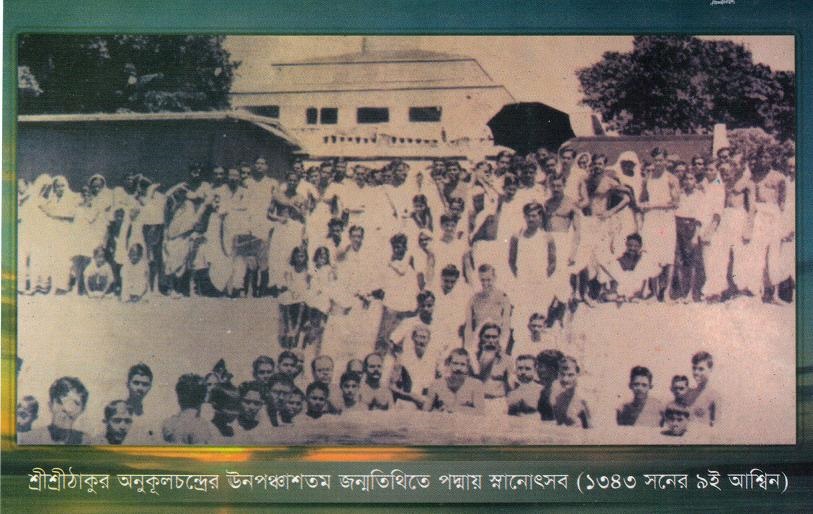 The very name of “ANUKUL” was coined by Mother Manomihini Devi before his birth.She derived the name extracting first letter of the sentence from the following Bengali verse.

14th September 1888 of the Gregorian calendar was the date when the fortune had smiled on this earth our Supreme beloved Sri Sri Thakur(revered) Anukulchandra was born in a remote village named Himaitpur in the district of Pabna, now in Bangladesh. Situated in the bank of river Padma with a sylvan surrounding this village was an undeveloped rural area surrounded by jungles, wild animals, snakes and criminals all around. Life there was hard to live. Insecurity, torture, disquiet and poverty made the air thick and heavy. People then did not know that this part of the earth had silently been blessed with a divine presence, that the redeemer of mankind had already proclaimed His advent, that their suffering and misery were soon to come to an end and the shower of providential bliss was to make them all propitious and divine.

The enchanting magnetic influence of Sri Sri Thakur had already begun casting a magic spell all around. It took no time for men to realize that there was something divine, something unique, something overpowering in the personality of Sri Sri Thakur from his childhood. Soon the stories of His Prophetic vision, His love for God, His sympathy, compassion and love for fellow-brethren, for the poor and the down-trodden, and the suffering and the sick, His magic touch as physician in healing and treating the diseased, the divine ecstasy and thrill of His Kirton (High pitch devotional song), His undergoing trance for days together without any sensation of life, throbbing of heart and pulse-beating, His divine revelations and utterances in various languages during the trance and there after his uniqueness of His personality spread far and wide like a wild fire. People began flocking round Him day in and day out to catch a glimpse of the Divine man. Men from all walks of life and from all parts of the globe-scientists, philosophers, academicians, judges, barristers, artists, engineers, doctors, teachers, religious men, communal leaders, common men, farmers, women and many more came to have personal interviews with Sri Sri Thakur and went back overwhelmed, surcharged, inspired and exalted. Many of them accepted Him as their spiritual Preceptor and Guide.

Needless to say Himaitpur , once a remote village , turned into an ideal complex, and full-fledged township with numerous institution like the Tapovan School, the Arts and craft center, the Monmohini Institute of Science and Technology, the Vishwa Vigyan Kendra ( the science laboratory), the Satsang Press, the Power House, the oil-engines and dynamos, the mechanical workshop, the engineering works, carpentry, the steam laundry, Co-operative centers and other establishments and the campus became famous as the Satsang Ashram. Those who came to have the holy darshan of Sri Sri Thakur included Mahatma Gandhi, Deshbandhu Chittaranjan Das, A.K. Fazlul Haque, Gopinath Bardoloi, Netaji Subhas Chandra Bose and his parents, Shyamaprasad Mukherjee, Sarat Chandra Boseand hosts of other personalities before Sri Sri Thakur all of a sudden due to change of weather left the Satsang Ashram at Himaitpur and came to Deoghar in the district of Santhal Parganas of Bihar state on the 2nd September 1946 with thousands of His followers, leaving the assets as they were. In His indomitable manner and with His undaunted spirit Sri Sri Thakur once again began from the scratch at Deoghar and the vast complex of Satsang Ashram with more than millions of disciples within India, Bangladesh and the World bears a testimony to Sri Sri Thakur’s greatness, His untiring zeal, extreme far-sightedness, strength of character and divine inspiration.

Sri Sri Thakur has been accepted , adored and worshipped as the Prophet, Purushottam, the Sadguru, the Ista and the Living Ideal of the modern age by millions within India and abroad irrespective of caste, creed, nationality and race. He is the emblem of divine grace, mercy and bliss. His primary mission is the “being and becoming” of man that is life and growth goes in tandem of one and all. To live and grow is every body’s aim and whatever is needed to fulfill the life and growth of every individual along with his environment is man’s first and foremost duty.

Sri Sri Thakur says “I love man, I want the well-being of man. I know wherein lies the suffering of man and I go on doing that which might obliterate it. It’s not something of luxury to me, it is the craving of my soul.”

According to Sri Sri Thakur, God , Dharma, Culture and individual instincts and characteristics constitute the spine of the life and growth By adhering to all these a man’s becoming can be assured and fulfilled. Even science, politics and religion are meant to fulfill the needs of existence. Science therefore embrace religion. Regarding this Thakur said

An Ideal is the way to becoming and the embodiment of life and growth. The only way to lead an adjusted, happy and prosperous life is to be concentric to the Ideal follow His tenets and sayings and fulfill His wishes with an untottering adherence and active allegiance. When Dharma becomes awake, wealth, enjoyment and liberation follow suit. We have divided Dharma due to our ignorance. Sri Sri Thakur’s clarion call


“God is One,
Dharma is one,
Prophets are the same
Servers of the one…”

The Prophets come according to the need and necessities of the age. There is no difference among them at all. To deny the One is to ignore the all. The present Prophet is the consummation of all the past Prophets. All the Past Prophets converge in the present One and to adhere to the Present means to fulfill All. In trying to establish Him we are ourselves established, in fulfilling Him we are ourselves fulfilled.

“ If a man follow Sadguru, Satnam , Satsang and Satkarma that is activities for the Ista (Lord) with sincerity, he can then, in and through good and bad things, mistakes and shortcomings, happiness and sufferings, rise and fall go on prospering unabated by His grace. A man may have many shortcomings but nothing obstructs his progress if he utilizes all that he has for the establishment of the Ista and remains engaged in it.”

Sri Sri Thakur held that if the majority of men could become Ideal-centric it would not be difficult to unify the whole country under one platform.

“There is no other way out than to create a divine unifying platform. This platform of yours can never hamper the existence-nurturing self-interest and characteristics of anybody. There is no use in training man either to kill or be killed. Man has to be educated in order that he might exist and make others exist and resist with force which is derogatory to existential propitiousness.”

Sri Sri Thakur’s vast range of literature covers all aspects of human life, all subjects concerning man’s existence and growth. There is no topic which He does not discuss, analyse and elaborate, there is no “ism” which He does not fulfill and exalt. As fulfiller the best He unfurls the latent potentialities of one and all and goads and guides him to perfection. His love touch has transformed millions into life-divine and has exalted them to move ahead on the path of eternal being and becoming. He is the masterman and only Solved man of the age. He is the way to Love, Life and Lift. Sri Sri Thakur emphatically said