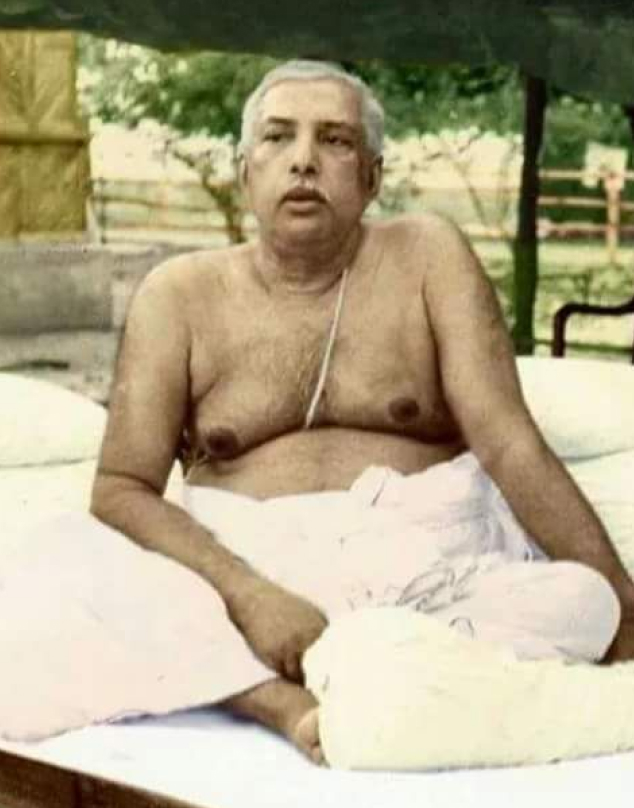 Sri Sri Thakur Anukul Chandra was an incarnate of God, in the lineage of all the past prophets namely

Sri Ramachandra, Sri Krishna, Lord Buddha, Lord Jesus, Prophet Mohammed, Sri Chaitanya and Sri Ramakrishna. All the past prophets, including Sri Sri Thakur Anukul Chandra, are the embodiment of the supreme power, the great Creator. They descended at various times with His message for the welfare of the mankind. They came to save the mankind by demonstrating the path of virtue and virility. They all were the living image of God during their contemporary period. They lived a life, which was the most appropriate for the contemporary humanity to adopt and seek growth and happiness in all spheres of life. At all times, they carry the message of peace and prosperity, love and life, and above all they tell us exactly how to live a life thereby the ultimate objective of mankind can be achieved. They came for the whole mankind. They did not discriminate among caste, creed, ethnic division and geographical boundaries. They suffered for the mankind, still they showed us the path out of sheer mercy for their creation. In all ages, they have shown the path for the evolution of the mankind.

under various circumstances. Some of his early associates could know by various incidents that the God has taken the form of Anukul and they got their findings tested again and again. When they were confirmed of their findings, they started spreading this message for the benefit of the humanity. There were a number of symptomatic happenings of the grand descend, even before the child Anukul was born. There were early predictions made by some monks and sages, who apparently were precursors of the prophet and made preparatory arrangement for the Supreme Soul to arrive and serve his mission. The mother Manmohini Devi was blessed and was foretold by few devoted souls about her child. From his childhood days, a number of happenings confirmed that child Anukul was not an ordinary child. His words, behaviour, deed and above all his love and service to his immediate surroundings made him a crowned child. He became saviour to many. He did perform such extraordinary feats that he was liked, appreciated and adored by one and all. He started spreading a holy message, he performed mass spiritual arousal, he cured many a patient, he created a movement by sheer strength of his personality, which radiated nothing but purity and divinity of the highest order.

All these happened normally, without Sri Sri Thakur making any effort for that. He lived a divine life from the early childhood days. His masterly qualities were inborn. During his span of life, he had never taken time off for achieving any kind of power, which he displayed all along. His words became prophetic. His prescribed ideology brought solace and salvation to many souls. People found a normal resemblance with the known divine personalities of immediate past in Bengal like Sri Chaitanya dev and Sri Ramkrishna dev.

The belief and perception that Sri Sri Thakur was the incarnate was put to test by a number of skepticals, and their skepticism was turned into faith and was confirmed by their realization and even hardened criminals got transformed into sages. Faith of a few gradually gathered wings of reason and a nucleus of mass hysteria was generated.

Whoever came into the contact of Sri Sri Thakur got a new vision and the vision transformed not only the individual, but created a new sensitivity around. As if, the society came to posses something it was looking for ages in desperation. That was the early twenties in the twentieth century, when Sri Sri Thakur was in his thirties. That was a period of revelation, when a charming and loving youthful Sri Sri Thakur was spreading the message of love and divinity like wild fire. Who ever came in his touch was finding a sacrificial fire for purification and elevation.

The highest manifestation of divine qualities

Sri Sri Thakur has been measured to be much more than what human mind can do up to. By any standard of assessment, one fails to reach the bottom of his depth. During his span of lifetime, it is difficult to estimate as to how many persons would have tried to assess him. People from all walks of life have come, seen, talked and have surrendered at his height of greatness. A look at Sri Sri Thakur, a word from his mouth was enough to fill one’s heart with content. It is something like watching the vast expanse of the sea standing on a beach. When humanity failed to fathom his depth while was overwhelmed by his love and effulgence, then humanity placed him at the highest pedestal and that was the place of the Supreme father. Sri Sri Thakur was seen to be infinite in finite form. By his extraordinary power, he was christened as omnipotent. He could do wonders. So he was the most powerful. He could find solution to all kinds of problems, so he was omniscient. Who else he could be, if he was found to be the dearest and nearest one to every body and does nothing but good to every one? His expertise in any subject, be it knowledge or action, was seen to be unparalleled. The sheer volume of literature that he has dictated, covering a wide range of topics, is something unprecedented in human history.

Similarity with past prophets

Sri Sri Thakur’s style of living and approach to people was similar with those of past prophets. Sri Sri Thakur played more or less same type or role with regard to his mission and his instruments,

as were done by Lord Krishna, Lord Rama, Lord Jesus or Prophet Mohammed. All of them had ‘the welfare of existence’ as their goal, preservation of virtue and eradication of evil as their mission. All of them were lovers of existence. ‘Being and becoming’ was their slogan. Love and service was their instruments. The whole creation, living and non-living alike, was their province.

The concept of ‘dharma’ as explained by Sri Sri Thakur was strikingly similar with that espoused by all the past prophets. ‘Dharma’ is way of living and thinking where by our existence along with the environment remains in tact and gets further elevated by way of balanced growth of spiritual and material being. The codes of conduct and spiritual practices were also essentially similar. A thorough study of all the religious scriptures have brought out that the essence of the preaching of all the prophets are same as what Sri Sri Thakur has taught, but there is difference in style and appearance which is to be attributed to the difference in time and space.

Sri Sri Thakur was found to quote the contents of Gita, Bible and Koran, both in letters and meaning. It is difficult to believe as to how was he doing that without studying those scriptures even once. Many of the apparent contradictions in religious practices were resolved by Sri Sri Thakur by unraveling their true meaning and context. He was able to establish a fine similarity and synthesis among the plethora of versions and interpretations of religion. He in fact would tell what is the intended meaning of the sayings of Gita, Bible & Koran by the respective authors and how the meaning in course of time has suffered distortion. He would even go to the extent of saying the setting under which a particular event did take place and what are causality factors, sequence of events and the characters involved in a particular event. The exact meaning of all the scriptural inscriptions were found crystal clear with Sri Sri Thakur. He could see, what happened and who were the people present when a particular scene in Bible was discussed with him. A number of such happenings leave little doubt in our mind that Sri Sri Thakur was reincarnation of all the prophets.